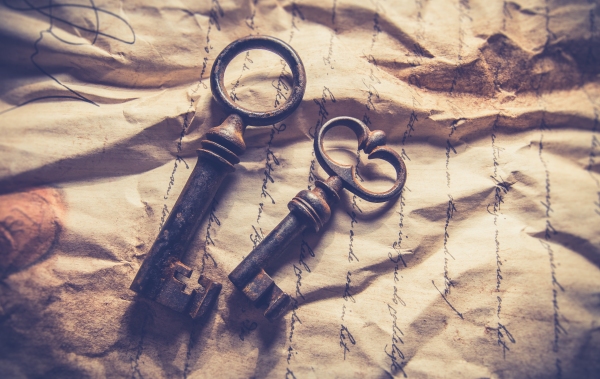 A snippet of this letter appeared on the Realm Maker’s Consortium Forum the other day as one lovely person posted it.  One paragraph only and it was a thunderbolt of realization to me that made my heart sing.  I found the whole letter here:

It would have been a big task without anything else; but I have been a moderately conscientious administrator and teacher, and I changed professorships in 1945 (scrapping all my old lectures). And of course during the War there was often no time for anything rational. I stuck for ages at the end of Book Three. Book Four was written as a serial and sent out to my son serving in Africa in 1944. The last two books were written between 1944 and 48. That of course does not mean that the main idea of the story was a war-product. That was arrived at in one of the earliest chapters still surviving (Book I, 2). It is really given, and present in germ, from the beginning, though I had no conscious notion of what the Necromancer stood for (except ever-recurrent evil) in The Hobbit, nor of his connexion with the Ring. But if you wanted to go on from the end of The Hobbit I think the ring would be your inevitable choice as the link. If then you wanted a large tale, the Ring would at once acquire a capital letter; and the Dark Lord would immediately appear. As he did, unasked, on the hearth at Bag End as soon as I came to that point. So the essential Quest started at once. But I met a lot of things on the way that astonished me. Tom Bombadil I knew already; but I had never been to Bree. Strider sitting in the comer at the inn was a shock, and I had no more idea who he was than had Frodo. The Mines of Moria had been a mere name; and of Lothlórien no word had reached my mortal ears till I came there. Far away I knew there were the Horse-lords on the confines of an ancient Kingdom of Men, but Fangorn Forest was an unforeseen adventure. I had never heard of the House of Eorl nor of the Stewards of Gondor. Most disquieting of all, Saruman had never been revealed to me, and I was as mystified as Frodo at Gandalf’s failure to appear on September 22.1 knew nothing of the Palantíri, though the moment the Orthanc-stone was cast from the window, I recognized it, and knew the meaning of the ‘rhyme of lore’ that had been running in my mind: seven stars and seven stones and one white tree. These rhymes and names will crop up; but they do not always explain themselves. I have yet to discover anything about the cats of Queen Berúthiel. But I did know more or less all about Gollum and his pan, and Sam, and I knew that the way was guarded by a Spider. And if that has anything to do with my being stung by a tarantula when a small child, people are welcome to the notion (supposing the improbable, that any one is interested). I can only say that I remember nothing about it, should not know it if I had not been told; and I do not dislike spiders panicularly, and have no urge to kill them. I usually rescue those whom I find in the bath!

This has been the way the world-building process and writing has been for me.  I had not met most of the characters till the chapter they entered the story.  Often, they do not reveal what they are about to do till the moment they do it.  What a fascinating experience it is.  When discussing some of the recent events of book 2, which I am now thinking about what to title the silly thing, since Book 2 is starting to get ingrained too strongly in my mind, we discussed how I came up with certain events.  There is no way possible to take credit for it, honestly save for listening to the characters and circumstance and writing down what I see and here.  Being the author, I am privy to the character’s internal monologue in general aspects, but not always.  There is so much I would share with you all right now, but I can’t or I’d ruin the surprises. Who wants an author that drops spoilers on his own work, right?

Anyway, it’s so wonderful to see that even JRR experienced the same joys and surprises I have been on this journey.  It makes me hope that some day this book series will become popular enough to warrant attention from other auspicious authors and have an impact on the lives of people where they’d even want to know such trivial details.

But the outcome is in God’s hands as far as I’m concerned.  I am doing the part I feel called to do, and that is to write and get these things out of my head, and into the public realm for Him to do with as he desires.  My paltry little “ministry” to those like me who wanted an alternative to typical fantasy fare.

Nothing much new done on the book yet today.  I’m struggling with a set piece… having my Ridley Scott moment.  If you know much about Ridley, you know he’s an insane perfectionist for creating visual imagery.  Probably even more than Kubrick was.  It is hard at times to capture the right majesty of a setting when you’re offloading ideas like a crane on a container dock.  You just want to get those containers off the ship and onto the chassis as fast as you can so the next ship can slide in.  After having experienced intermodal yards, I can tell you it’s quite an experience to see this in action with gantry cranes 100 feet tall.  In a small regard, I kinda miss it, but do not miss anything to do with the city in which I had to drive around to get the job done.  It’s bad enough with a car.  A Semi is far worse.  But I digress.

I have explained once before that my writing process is very much like transcribing movies, but with the character’s internal monologue?  Maybe, according to some praise, that’s why it’s easy for people to visualize what is going on.  It amazed me to learn that this isn’t always a common thing for authors.  Not everyone has such total visualization as they write and experience their work in a completely different manner.  A bit of a mind twister for me, but then again, I am constantly reminding myself that the way I experience the world is not always shared by others.  It’s what makes everyone’s vision unique in a good way.  Not only are we shaped by our experience, we are shaped by our perceptional bias.  Yeesh… not going down that thicket of pseudo-science right now.  You make of it what you will.

BTW, just got a nice interruption from my alpha readers who looked at one of the recent chapters and loved it.  I mean emphatically.  These are the kinds of things I love to hear.  Not only because of my ego, but because I got to share my vision with someone so well and in such an enjoyable manner… just it makes me happy to have made someone else happy… even if the chapter was about a rat bastard doing rat bastardy things.  ;c)  It was entertaining to the point of distraction, and that is a heady thing to do.  Anyway, that was a fun little interlude and put a smile on my face from ear to ear.

Enjoy JRR’s letter.  It explains a lot of the experience of a writer in a big project like this for those who are interested in such mundane trivialities that are filled with a peculiar and subtle magic.